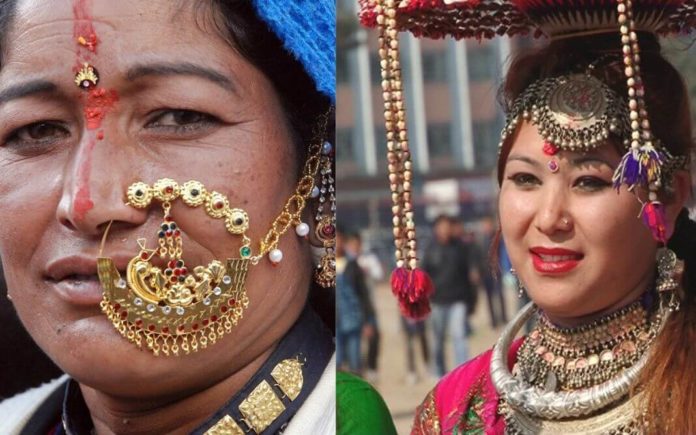 Known as the Dev Bhoomi (Land of Gods), Uttrakhand is one of the most beautiful states of North India.

It has been blessed with a rich and diverse culture. From beautiful traditional nathuli to elegant kundals/bali, the traditional jewellery of Uttrakhand shows the simplicity of its surrounding nature and rich mythology.

Worn by the women of Garhwal, Kumaon, and Jaunsar-Bawar region of Uttarakhand, Nathuli, or Nath is the staple jewellery for Pahari women.

Adorned widely by the Pahari brides, the Nath or nose ring is a must-have jewellery piece in the bride’s attire.

Nathuli or Nath not only showcases the rich culture of the Garhwal region of Uttrakhand but it has also become a fashion statement.

Nowadays, Nath is adorned by most of the Pahari and non-Pahari brides alike.

The number of pearls in the Nath signifies the financial status of the bride’s family.

Tehri Nath is one of the most distinguished jewellery pieces of Uttarakhand.

It is usually worn by the women at the time of marriage, social gatherings, puja and at important family functions.

Galabandh is one of the prominent jewellery pieces in Uttrakhand and is adorned by the women by Kumaoni, Garhwali, Bhotiya, and Jaunsari women.

As the name suggests, Galabandh is a choker necklace and is adorned around the neck by the married women.

Galabandh, the ornamental belt is designed with intricate detailing. The golden square-shaped patches are fixed on a red-colored belt with the help of a thread.

While Galabandh is adorned by rural women, it is not much popular among those who live in the cities.

Hansuli, also known by the name of ‘Khagwali’ is a choker necklace and is worn by Garhwali, Kumaoni, Jaunsari, and Bhotiya women.

Hansuli or Khagwali exudes the charm and beauty of Pahari women. People with a good financial status adorn a gold hansuli while the less affluent or poor people adorn a silver hansuli.

Handcrafted with intricate motif designs, Bulaq is an exquisite piece of nose jewellery which is worn at the nasal septum.

Earlier, it was worn by the women of Garhwal, Kumaon and of Jaunsar belt.

But now it is considered as an old trend and is rarely adorned by the Pahari women.

Pahunchi is basically a Gold bangle and is quite popular in both Garhwal as well as the Kumaon region of Uttarakhand.

In Kumaon, Pahunchi is considered to be an auspicious jewel for married women.

It is usually worn by married women at the time of festivals and important family functions.

Pahunchi is generally made in 1 tola or 3/8 troy ounce.

The quantity of Gold in Pahunchi depends on the financial status of the bride’s family.

Pahunchi uses red colored cloth as the base material on which the pure gold pearls are studded.

One of the most commonly adorned jewellery pieces in a Pahari culture, Pauje is basically an anklet that has a complex web-like structure which is slightly different from the usual Indian anklets.

It is made of gold or silver and has a lot of ghunghroos or metallic bells.

Made of silver, Bichhuwas are toe rings that are worn by Garhwali, Kumaoni, Jaunsari, and Bhotiya women.

These are crafted with intricate designs consisting of Indian motifs, peacocks, flowers, and petals.

Available in different shapes and sizes, kundals are either made in gold or silver.

The most famous ones are the big gold earrings, having a circular shape.

Kamarbandh is a belly-belt and is worn around the waistline by the women of different communities of Uttarakhand.

Kan-fool means the flower of Ear and is worn on the earlobe.

It is a masterpiece of the classic era jewellery worn by the Pahari women.

The classic piece of jewellery, kanfool is adorned by most of the Pahari women.

The Sikka mala commonly known as Kaldaar is one of those pieces of jewellery which is popular in many regions of the Himalayas.

This simple jewellery comes fitted with a number of old coins or sikkas which gives it a rather interesting look.

Which type of jewellery did you like the most? Drop comments and let us know your favourite pick.

Read about the traditional attire of Uttrakhand.