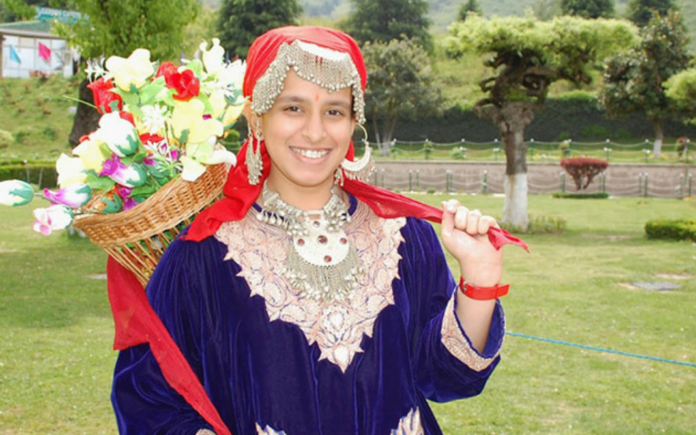 Jammu and Kashmir is well known for its embroidery and intricate designs, which reflects the richness of its culture and tradition.

To counter the cold weather of Jammu and Kashmir, most of the garments are made of wool and silk which are designed with the intricate embroideries.

Here’s everything you need to know about the traditional dress of Jammu and Kashmir.

Traditional Dress Of Jammu and Kashmir

The Pheran is a long piece of cloth, stretching up to the feet with narrow sleeves.

The Pheran is wrapped tightly around the waist by a piece of cloth called Lungi.

While the Pheran is adorned in autumn, suits are adorned in summers by the Kashmiri Hindu women.

Taranga is a colored scarf, the headdress of a Kashmiri Hindu woman.

Taranga is stitched to a suspended cap and it narrows down at the back, towards the heels and is an important element to be adorned by Hindu Kashmiri bride at her wedding.

Deji-haro is the silver jewellery ornament for the ears and it symbolizes the marriage status of a Kashmiri Pandit woman.

It hangs from the upper portion of the ear and passes through the holes in the ears pierced at the top end of both the ear-lobes.

Apart from deji-hor, earrings, anklets, and bangles are adorned by the Hindu Kashmiri women.

The Pheran worn by a Muslim Kashmiri woman is a traditional piece of cloth, long up to the knees, and has broad sleeves with brocade patterns and prominent pockets.

It is embellished by intricate and elaborated Zari embroideries or floral patterns around the neck.

It looks very different from the Taranga and is tied around the forehead like a turban and decorated with trinkets and silver pins.

The traditional headgears are made of fine and warm wool and are used as adorned as a protection against the extremely cold climatic conditions in Kashmir.

The unmarried Muslim Kashmiri girls wear the skullcaps which are embellished with the gold thread embroidery and decorated with the trinkets, pendants, and amulets.

These were some of the beautiful and magnificent traditional attires and jewellery styles of Jammu and Kashmir.

Which type of attire and the jewellery did you like the most? Drop comments and let us know about your favorite pick.

Traditional Jewellery of Gujarat and Its Making Process