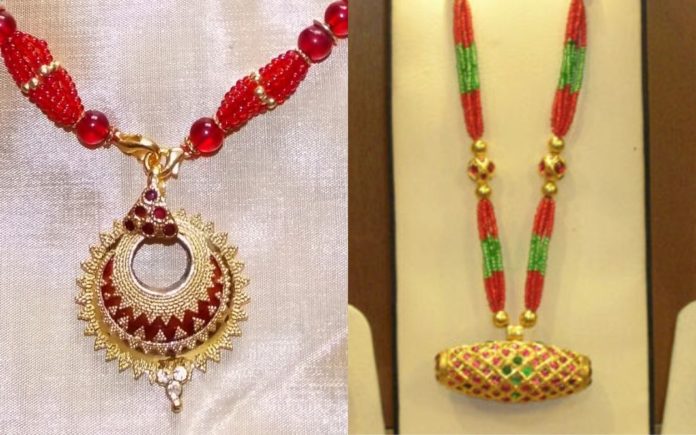 The traditions and attire of Assam along with its enchanting jewellery styles reflect the presence of many tribes and kingdoms that have shaped the state’s culture.

From wild habitats and ancient temples to the jewellery styles inspired by nature, Assam has it all.

Assam jewellery is crafted with hands by the skilled artisans and workers of Assam.

The traditional jewellery designs contain motifs of flora and fauna as well as musical instruments such as dhol.

Here’s everything you need to know about the traditional jewellery of Assam.

While some scholars believe that the word ‘Assam’ is derived from the Sanskrit word Asoma which means unparalleled, the majority of the academic circles believe that the term has come from the original name of the Ahoms kings, who ruled Assam for about six hundred years.

It was during the Ahom dynasty, Gold-washing along with the Manufacturing of Gold Ornaments flourished in Assam.

Even though Gold dust was abundantly found in the sands of different rivers of the state, the major quantities were taken from the river Subansiri (one of the major tributaries of the Brahmaputra).

It was during the rule of the Ahom kings that the gold-washing on the banks of the Subansiri became the major profession in Assam. Ever since then, Assam has been famous for its traditional Gold jewellery.

Assamese jewellery in Jorhat is very famous among the locals as well as the tourists. The artisans who make the traditional Assam jewellery are called ‘Sonari’ in the Assamese language.

Traditional Assamese jewellery is made with hands by the Assamese artisans. Inspired by nature, most of the styles include motifs of birds, animals, musical instruments such as dhol, drum, pepa, etc.

Read everything about the different types of traditional Assam jewellery below!

Crafted in the round shape, Kerumuni has a hollow pendant called “Keru”. The strands of this necklace consist of Pearls or moti.

Initially, this type of design was only used in earrings but as the trends have evolved, it is now being used in the pendants as well.

These are the traditional Assamese earrings that are adorned by aged women of Assam. The traditional Thuriya has a very unique shape. It consists of a front side that looks like a flower, a thin middle portion, and a wider bottom portion.

Its design helps the earrings to stay intact in the ears.

This is a chunky bracelet/bangle made of silver or gold. Adorned by Assamese women, Gam-Kharu is one of the most beautiful jewels of Assam. It can be opened with a golden knot attached to it and therefore, it can fit anyone.

In Loka Paro, the pendant is embellished with identical pigeons, positioned one after the other, and attached to a string containing gold beads.

The pigeons embossed on the Loka Paro necklace are adorned with a wide variety of gemstones such as Rubies, Emeralds, Amethyst, Rose Quartz, etc.

You can buy such designs of Assam jewellery online.

In Assamese, Jon means the Moon and Biri is the surrounding designs of Jonbiri. This is an eye-catching accessory that is adorned by the beautiful women of Assam.

Its design is inspired by musical instruments, nature, and household goods of Assam.

Inspired by Dhol (a musical instrument), the traditional Dholbiri comes in dhol shape. It is considered as one of the most popular decorative ornaments for Assamese women.

Gal means neck and pata is the flat design of Gal-pata. Adorned by the beautiful women of Assam, Gal-pata is a traditional choker necklace made of Gold. It is embellished with intricate floral designs.

The making of Assamese Jewellery

Traditional Assamese jewellery is crafted by a group of Artisans known as “Sonari”. Most of the jewellery styles contain silver or lac as their base metal and Gold foil as their coating.

However, as the trends are evolving, people have started to prefer Gold base over the silver or lac base. As a result of which, Assamese jewellery now comes in 3 types of metal variations.

You can buy such styles of Assam jewellery online or at the Ranthali village of Assam.

Traditional Attires worn by the different Tribes of Assam

Assam is the home to a variety of racial stocks such as Monogrid, Indo-Burmese, Indo-Iranian, and Aryan. Each of these tribes has its own unique culture, tradition, lifestyle and clothing.

Here is a list of the traditional dresses of the major tribes that reside in Assam.

The women of Khasi tribe wear a Jainsen that covers their body right from the waist down till the ankles.

Usually Jainsen is made of Cotton but for the elder women, it is made with woollen cloth.

The women of this tribe adorn simple and colorful attire.

Gero: Gero is the upper body garment and is tied around the waist and chest on top of ege. The traditional Gero consists of a white-colored cloth with red and black colors.

Sori Potali: It is similar to Gero except for the fact that the design in a Sori Potali is woven in check with red and black colors.

Koum Kontong: It is a skirt that is wrapped around the waists of Assamese women. It has exquisite vibrant patterns

Kambang: It is used to cover the upper body.

A belt made of beautiful shells and pearl balls is usually adorned by Assamese women. Tied around the abdomen, these belts are commonly called the Labok.

It is a long piece of cloth that is worn on the waist and it goes down all the way to the ankles.

It is an ankle-length cloth and therefore is widely worn during the summer seasons.

So these were the traditional jewellery styles and attires worn by the Assamese women. Which type of jewellery did you like the most?

Drop comments and let us know your favorite pick!