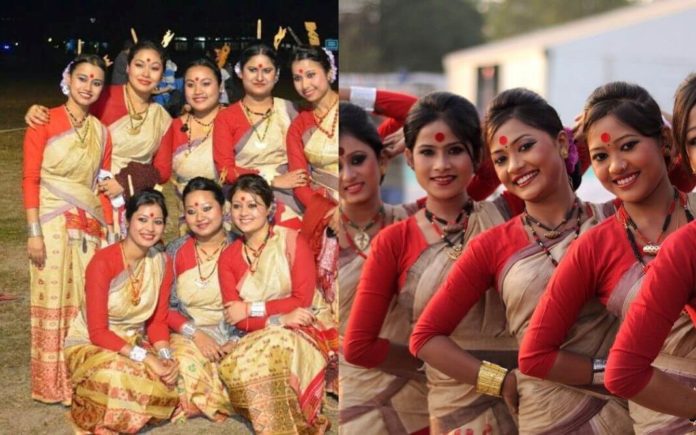 Assam is the most beautiful North Eastern state. It has a fascinatingly diverse culture and tradition.

Assam is the home to a variety of racial stocks such as Monogrid, Indo-Burmese, Indo-Iranian, and Aryan and each of these tribes has their set of unique culture, tradition, lifestyle and clothing.

Black, red and green colors dominate the traditional dress of assam and jewellery.

Here is a list of the artistic dresses and jewellery of few of the major tribes that reside in Assam.

Traditional Dress of Assam For Women :

Mekhela Chador is the traditional dress for Assamese women, worn by women of all ages except children.

It is a long piece of cloth that is draped from the waist downwards and is then folded into pleats and tucked in.

Chador is the upper body garment. It is a long piece of cloth whose one end is tucked into the Mekhela (lower body garment), and then the rest is wrapped around the body. This Chador is worn with triangular folds. 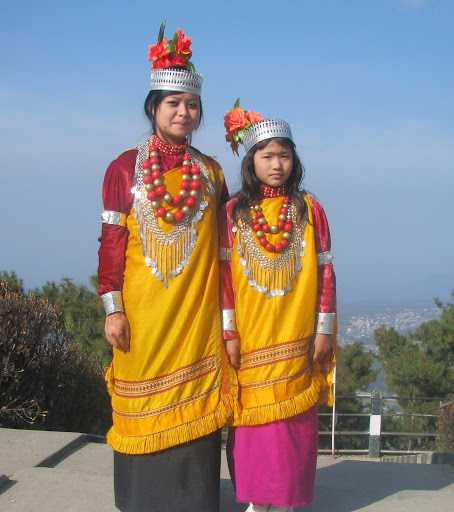 The women of Khasi tribe wear a Jainsen that covers their body right from the waist down till the ankles.

Usually Jainsen is made of Cotton but for the elder women, it is made with woollen cloth.

Known as the Miri people, Mishing tribe natives inhabit 11 districts of Assam. The Mishing tribe is the second largest tribe in the North eastern region of India.

The women of this tribe adorn a simple and colorful Assam dress.

Ege: It is a lower garment worn to cover the lower part of the body from waist to ankle length.

Gero is the upper body garment and is tied around the waist and chest on top of ege. The design in a Gero is always woven in the centre of white colored cloth with red and black colours.

It is similar to Gero except for the fact that the design in a Sori Potali is woven in check with red and black colors.

It is a skirt resembling clothing wrapped around the waists of Assamese women. It has exquisite vibrant patterns.

It is used to cover the upper body.

A belt made of beautiful shells and pearl balls is usually adorned by Assamese women. Tied around the abdomen, these belts are commonly called the Labok. 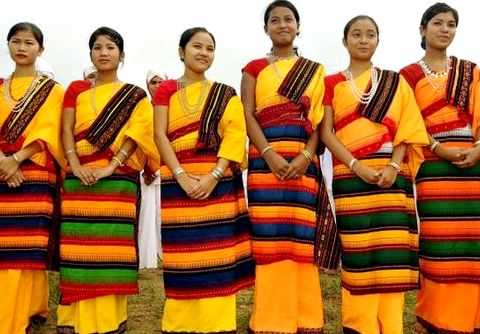 Rigu is fairly similar to the Mekhela Chador except the fact that the Rigu is a more standard piece of clothing, adorned by the beautiful women of Dimasa tribe of Asaam. It is a beautiful traditional long piece of cloth worn from the waist down reaching up to the ankles.

It is a type of Assam dress that has only one design throughout. It is an ankle length cloth and therefore is widely worn during the summer seasons.

The traditional jewellery of Assam is handmade, crafted by the skilled artisans and workers. Assamese jewellery typically contains the designs of flora and fauna and musical instruments.

Here’s everything you need to know about the traditional jewellery of Assam.

It has a round shape, one side wide, one side narrow and hollow style called “Keru” in the middle. Popular among the locals, previously this design was only used in ear pieces but it is now used in pendants as well.

These are the earrings adorned by especially aged village women of Assam. The traditional Thuriya has a very unique shape where the front side looks like a flower and the middle is thin so that it can stay in ears and the bottom part is wider than the middle portion.

This is a chunky bracelet/bangle made of silver or gold, adorned by Assamese women. Gam-Kharu is one of the most beautiful jewels of Assam and can be opened with a golden knot attached to it and therefore, it fits any standard sized hands of a woman.

Paro means pigeons. In Loka Paro, the pendant is embellished with identical pigeons, positioned one after the other, attached to a string containing gold beads. Loka Paro is also made with ruby, mina, or flush natural enamel coating.

In Assamese, Jon means the Moon and Biri is the surrounding designs of Jonbiri. This is an eye-catching handmade accessory adorned by the beautiful women of Assam. It is inspired by musical instruments, nature and household goods of Assam.

Inspired by Dhol (musical instrument), Dholbiri is usually prepared in a traditional dhol shape. Biri means the surrounding design. It is regarded as one of the most popular decorative ornaments for Assamese women.

Gal means neck and pata is the flat-sized design of Gal-pata. Adorned by the beautiful women of Assam, Gal-pata is a traditional choker necklace made of Gold. It is embellished with intricate floral designs.

These were the beautiful Assamese traditional attire and jewellery.

Which type of jewellery or attire did you like the most?

Drop comments and let us know your favorite pick.

4 Tips To Keep In Mind While Purchasing Wedding Band Online

6 Transgender Women Who Are Shaping The Fashion Industry

10 Companies That Hired Transgenders In India

© 2021 Zerokaata Store. All Rights Reserved. ZeroKaata Studio: India's Premier Digital Magazine
ZeroKaata Studio features the best of jewellery, fashion, lifestyle, art, and travel along with exclusive initiatives such as #ZeroKaataForWomen and #ZeroKaataForLGBTQ.
Read everything about our most famous content categories below!