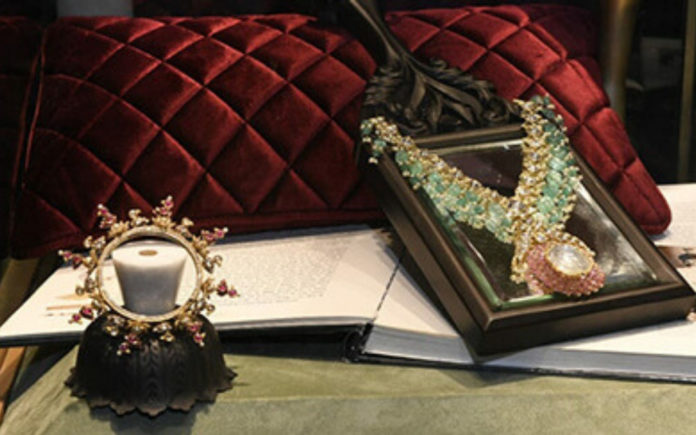 I hope that you have not missed any of the fragments of the 15th Jaipur jewellery show (JJS).

However, in case you have, we are here to uplift your sighs and walk you through the snippets of everything around and about the JJS.

The humongous affair of jewellery that took place in Jaipur was a spectacle of pomp and merry outcry.

It was hands down the opportunity for the jewellery fraternity to have themselves showcased in the best possible lights.

With the different meets and the exhibitions, there was not anything worth missing for you!

Before I tell you the interesting tits bits about the show, here’s why the organizers selected Jaipur for the show

Known as Pink City, Jaipur, is a charming city, full of grandeur architectures, bazaars, and chowks.

The city has not only kept its old art and craft but has also evolved from traditional to modern and contemporary art forms.

The city has given to various artists, artisans, and craftspersons. Jaipur’s Jewellery styles are famous not only in India but also worldwide.

All its products, especially the colored gemstones, silver Jewellery, and Kundan-meena jewellery has helped the city to become one of the most renowned tourist destinations.

The Jaipur Jewellery Show (JJS) brings together all the jewellery forms every year for all you to inhale, absorb, and relish the art of jewellery making.

With the upholding objectives of providing a platform to the manufacturers of gem and jewellery, creating awareness about the industry’s potential, creating a multitude of job opportunities in both rural and urban setting, to give the local jewellery a wide representation; the inaugural of JJS took place with a poster release ritual undertaken by the Union textile minister Ms. Smriti Zubin Irani and later followed with an opening speech Mr. Ahmed bin Sulayem, executive chairman DMCC.

His presence bewitched the audiences as being a part of one of the greatest B2B and B2C he enlightened everyone with his share of knowledge on international trade.

The show would have been nothing without its exhibitors.

The different exhibitors convened a tremendous and delightful collection on board.

It was incredibly varied that held the potential of satisfying a zillion customers needs and tastes. To talk about the list of the exhibitors, it is factually tiring and endless.

The exposition was not a mere display of the jewellery, it was a bigger than thought event.

The multi-faceted show had some crucial meets as well wherein the big industrialists, the artisans – they all had meetings according to their associations which were enriched in a lot many ways.

Other than meets there were little spontaneous sections of a talk show with an added fun game element of KBC.

To add the edge of healthy competition the event also witnessed an award show.

With the Bollywood actress Chitrangda Singh gracing the ceremony, there were awards given to the best amongst all in the different categories.

There were myriad of entries that flowed in for the awards and all of them were judged on the basis of uniqueness, fineness, craft, design, wearability etc.

The annual event of glimmer and glamour was deemed affluent and successful on various pretexts and by the different buyers, consumers, industrialists as well as connoisseurs.

It was one exposition where you could have to find from rough stones to finished jewellery all under one roof.

It hosted different meets and talk shows, the jewellery made spaces in the hearts of masses with its beautiful and impeccable depiction.

With extensive media coverage, it was one of the exemplary jewellery shows.

Stay tuned with us for more such glimpses of events!