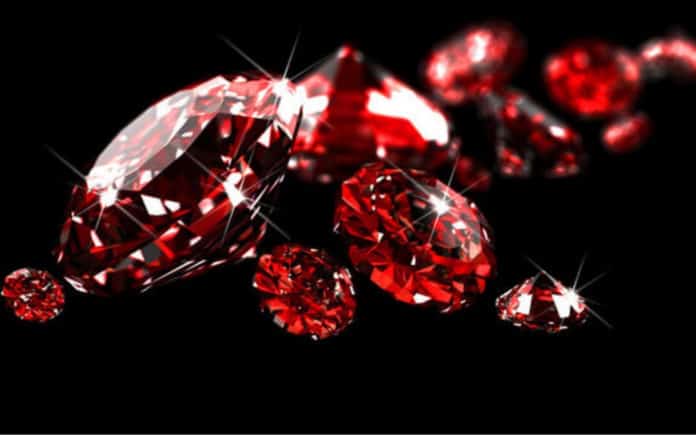 Known to be the king of gems from the archaic times and continually in the present, Ruby has a set of profound properties that make it stand apart from the other gems.

The pronounced red color, singular exquisiteness, and unmatchable charm make it preferentially admired by the masses.

Its commendable qualities have the capacity to command the highest per-carat price amongst the colored stones.

Ruby-like Sapphire falls under the variety of the mineral corundum which in its purest form stands colorless.

The variations in the color are a result of the presence of the trace elements in the mineral’s crystal structure.

The trace element Chromium contributes to the staunch red hue of the ruby. The color gets stronger depending on the percentage of Chromium in its structure.

The word “ruby” has its origin from the Latin word “ruber” which connotes to the red color. The various communities held a certain set of beliefs with regard to Ruby.

Amongst these beliefs, one such was where Hindus believed that offering fine rubies to Lord Krishna ascertained rebirth as an emperor.

Another thought of school were the Burmese warriors who held the propositions that rubies made them invincible in war. According to the medieval Europeans, rubies bestowed health, wealth, and success throughout.

The paramount factor which helps in determining the true value of a ruby is its color.

There is quite a range of colors that rubies have. Starting from the saturated red to dark red and ranging to orangey-red and purplish red.

Despite the availability of the different colors, the most sought after color by the collectors worldwide is the deep red; that’s why you see so many ruby earrings in static red color.

Sometimes tinged with a hint of purple and such rubies are known occasionally as “pigeon’s blood” in the trade attributing to their deep, unmistakable color.

A ruby’s value gets impacted duly with its transparency and clarity characteristics.

Inclusions can impact the value of rubies negatively as they affect its durability.

However to think of rubies devoid any inclusions is practically impossible.

Certain inclusions in the form of rutile or thin mineral needles contribute positively to the gem’s appearance.

Myanmar is the most famous source of rubies.

With the change in origin, the composition changes as in some mines rubies have higher iron content while in other they are darker and less intense in color.

In order to bring about improvements in the color or clarity of the stone heat treatments are used as it causes fractures to heal in certain conditions.

Additionally, the treatments assist in decreasing the visibility of the fractures that are filled with glass and repolished.

Buyers should be aware of the treatments the gemstone has undergone.

The obliging and irresistible rubies are go-to jewellery picks that give classy tinge to your outfits.

Knowing your gems is crucial as well as undemanding.

Drop in the comment section below the names of the gemstones you would love reading more about.