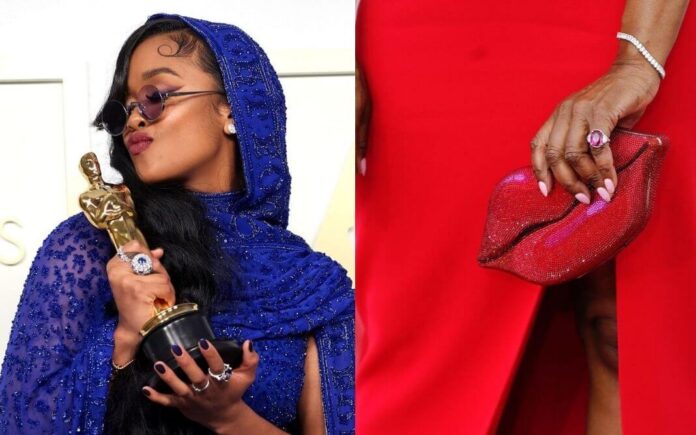 The 2021 Oscars have drawn to a close, the ceremony has everyone’s tongues wagging. Whether you agree with the winners or not, we can all agree that the red carpet was the fashion moment we all deserved right now.

Everyone brought the drama, bearing midriffs, dripping sequence, and showing off their shoulders. Hollywood’s finest men also got in on the action and ditched their boring tuxes in exchange for bold colors and designs.

The beauty looks were equally on point and the stars gave us plenty of manicure inspiration for our next nail look.

Regina King delivered nothing but looks on the red carpet and her poignant opening speech had us hanging on her every word. Her custom Louis Vitton gown is flawless in its structure and her metallic silver nails complement the jewel accents.

Celeste Waite was one of the Oscar newcomers that stole the show this year. She wore head-to-toe Gucci and her anatomical heart-shaped clutch was quite the statement piece. The red accents on her dress and bag were pulled together with her chic lip color and crimson nail polish.

Novelty clutch purses were all the rage this year and Angela Bassett made her way down the carpet with an iconic Judith Leiber piece. The purse with its shimmering rhinestones and her bright red dress created a show-stopping combination. She opted for a classic pale pink nail color to complement, rather than distract from, her gorgeous ensemble.

Emerald Fennell took home the Oscar for Best Screenplay for the film Promising Young Woman. She took home her first win in a vintage-inspired green and pink flowing floral gown.

The gown had subtle shimmering accents which she mimicked in her nail color, serving up a delicate blush glitter nail polish.

Kerry Mulligan looked like a million bucks in her mid-riff-baring golden Valentino gown. The sheer volume of the skirt is what dreams are made of and she kept her makeup and accessories toned down to let the dress do all the talking. Instead of plain gold nails, she settled for nude nails accented with a golden reversed manicure. This manicure style sees the nail accent on the cuticle rather than the nail tips.

Glenn Close kept it classic in a beaded tunic with some epic shoulder pads. She chose to wear royal blue satin gloves to compliment her Armani outfit. Even though we didn’t get to see much of her manicure on the carpet, Glenn hid a happy little secret under her gloves. She showed off a bright yellow manicure while she was getting ready for her big night.

H.E.R was another first-time winner on the night. Her original song “Fight for You” was a powerful addition to the “Judas and the Black Messiah” film.

The custom cobalt blue ensemble by Dundas gave a nod to the late icon’s 1985 Acadamy Awards look. She opted for a shade of midnight blue on her nails to complete her fierce beauty look.

It wasn’t only the ladies that got into the manicure game. Paul Raci was up for “Best Supporting Actor” for his role in “Sound of Metal”. His rock ‘n roll look, complete with a bejeweled collar pin, was spot on and the faint pinstripes in his suit gave his look just enough flair without overdoing it. He sported a glossy black manicure to keep true to his alternative roots.

6 Best Tips to Take Good Care of Your Nails