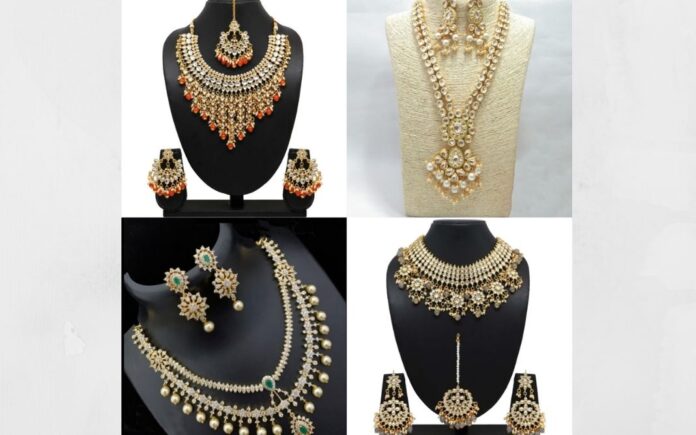 Do you have any idea where the very first diamond was discovered? Do you know that “carat” was invented in India?

Do you know that India is also one of the top jewelry exporters in the world?

Many Indians believe that women should decorate themselves with jewelry. Also, it symbolizes one’s identity.

Jewelry is a necessary part of the lives of Indians. Its importance within an Indian woman’s life could be gleaned from the amount of jewelry presents she receives on many different auspicious events in her life and how every woman must-have jewelry that they could afford.

Aside from raising the attractiveness of Indian women, Indian jewelry can also be regarded as a thing of financial safety in times of monetary crisis because of the value. To accentuate the beauty, women wear jewelry made with precious metals and stones such as gold, diamonds, platinum, and silver.

Jewelry can be found in a wide variety in India. It is because of the fact that every state has its own culture, therefore jewelry is worn to highlight the worth of these customs.

Now, let us understand the importance and logic behind every piece of jewelry worn by Indian women. Here we’ve got a list of a few of the most frequently worn jewelry pieces together with their cultural and scientific importance.

Maang tika is made up of a chain with a ring at the front along with a hook at the other end. A lady’s forehead, particularly the center part, is thought to be the location of chakra, which describes preservation.

It signifies the final union of man and women where there’s no separation. According to science, this marriage is the meeting of the female and male at the physical and the psychological level.

It is known as nath. The nose ring is unquestionably the most enchanting jewel piece without which a married lady’s make up is deemed incomplete. It forms an essential component of conventional bridal jewelry, keeping in view its scientific and conventional worth.

Aristocratic families get particular nose rings made for the bride since it is believed to be the most auspicious gem to be worn during the marriage.

It’s thought that girls having pierced nose encounter significantly less pain during childbirth. According to Ayurveda, the nose ring is also attached to a women’s emotional, intimate, and sexual propositions.

It’s among the most exciting jewelry pieces worn by both unmarried and married girls. Offered in a huge array of shapes, colors, and dimensions, it attracts every girl towards it and plays a significant part in fashion accessories. Matching earrings with clothes improve the appeal of nath manifold.

Another important types of jewelry are earrings. Earrings are often made from precious metals such as platinum and gold. When a woman has pierced ears, it is because of a special event in her life, or in the past, such as a wedding.

According to some renowned legends, wicked spirits were thought to enter the body through some of its openings. By wearing jewelry, the girl realized a state of absolute wellbeing.

The most recent studies also have demonstrated that the ear is a microcosm of the whole body and has a significant nerve that connects the cervix, kidney, and brain.

By applying the proper quantity of pressure in the ideal ear to where the guts of this kidney are linked, the function and health factor of the kidney and the bladder increases.

It is worn close to the heart is thought to control feelings and fortify one’s love. Wearing a necklace of stone is thought to bind ourselves using their ceaseless powers. The necklace can also be considered as protective jewelry against evil spirits.

It not merely adds an amazing appearance to some women’s attractiveness but also functions as a strong restraint against ramifications of wicked charms on virtuous maidens. Since ancient times, it is worn to bring good luck.

Bangles, the term itself appears to fill you with all the sweet tinkling sound generated by it! Wearing bangles are readily given by any girl, whether wealthy or poor, since it’s offered in just about all metals, from precious ones to glass bangles.

The appealing designs in which bangles are available make it even more magnificent and a lady’s beauty is deemed incomplete without wearing it. Aside from being a significant decoration worn by a married woman, it has enormous amorous and romantic connotations.

The noise of bangles expresses her existence and her desire for attention. Scientifically, it’s proven to increase a woman’s blood flow level and channelize the power passing through her outer epidermis. This can be made possible because of an adorable tinkling sound.

The most distinguished scientific reason behind wearing toe rings is that it makes the menstrual cycle more regular. It is a common problem faced by girls. The nerves in the feet are linked to the uterus and moves through the heart.

When women and girls do their chores while wearing these toe rings, the friction generated assists in revitalizing reproductive tissues.

As they are usually made from silver, it absorbs energy from the ground and refreshes the girl’s whole body by transmitting the power to it.

The wedding ring is worn on the fourth finger or the middle finger. The nerves on this finger are connected to brain neuron cells. With metallic friction, girls attain good health and have the confidence to take care of life easily.

The wedding ring worn at the middle finger is thought to be directly correlated with the heart, which assists in controlling the wearer’s feelings. These days, rings of different stones have been worn by girls for various health and spiritual benefits with different gemstones.

Traditionally, the bridegroom gives it to the bride during the marriage. It’s worn by the married woman representing feelings of love and devotion between the married couple.

7 Easy Ways To Add Glamour To Your Look