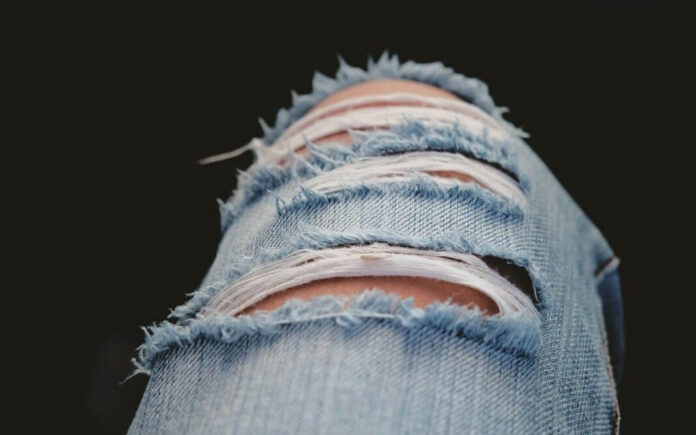 Jeans, one of the most iconic garments ever created, have been popular over time, over places, over generations!

Jeans have been useful, helpful, strong, different, fancy, cheap, and expensive, jeans have been everywhere, to work, to relax, to be casual or just to lounge in.

Jeans have been really important inside our journeys, inside our history and our stories, I bet most of the people have a funny story connected to them.

Let’s take a step back, and let’s think about the purpose, the origin of this garment.

The History Of “Jeans“

Since the beginning, this garment has been used by everyone (it’s true mainly by men but not just them).

For almost a century, since the World Wars, jeans were synonymous with workers, explorers, wild people, or, in some situations a distinguished sign of someone who used to work with animals, the garment was not just “noble” but precious as well for its nature.

The 50s: Where It All Started (The Concept Of Ripped Jeans)

As we know, the ’50s have been important for the fashion industry because new values and ideas came out, the decade was a real rebirth of aesthetic standards, new trends, new ideas, new visions started to become popular, used, and followed.

It was during the ’50s when people started to pay attention to their dressing, at that moment these strong trousers came to life and became a fashion statement.

No one really knows how a trend is born, for example, if we talk about ripped jeans, no one really knows their origin. How did this style, which was synonymous with “poverty”, of carelessness maybe even an element of youth (we can see easily more kids playing around and rip their garments than adults) got a new value?

What we do know is that during the ’50s, famous people such as Jane Russell, Brigitte Bardot, Marilyn Monroe, James Dean, and Marlon Brando started wearing ripped jeans.

With the ’60s and the hippie culture, we had a new evolution, the ripped jeans stabilized their idea everywhere and became, “officially”, a status symbol.

With the ’70s and the change of generations, this trend became more and more popular, especially among the younger generations.

The ’80s witnessed a huge number of subcultures embracing this trend after which, its acceptance increased year after year arriving at the peak with the grunge culture at the end of the 80’s/beginning of the ’90s.

With the new millennium, the idea of the ripped jeans as a fashionable trend more or less decreased, it didn’t disappear but was really much less visible.

It was around 2014-2016 when the world started to witness a sudden increase in the production as well as acceptance of ripped jeans but this time its meaning was different.

It was connected to something new, the idea of nostalgia, the idea of a “sweet past”, the past we never lived but heard about through our families, and friends, watched in movies, or read in books.

This time, this trend really became global. It even touched those areas where the “western fashion” was not so popular like the African or the Indian regions.

Almost every clothing/fashion brand produces at least one kind of ripped jeans every year and the combination between these new values and the ripped trousers, has created a new global identity: it’s really rare to have people complaining about them (of course, it also depends on how much ripped they are!). Nowadays those little ripped details are used for a more “intriguing” look.

So, the fashion market has approved the concept of ripped jeans but this doesn’t mean that they have been accepted by society with open arms, especially in the areas where people are not really aware of the latest fashion trends.

For example, in western countries like Europe, North America, Oceania and all the other bigger realities all over the rest of the world have accepted ripped jeans after almost 70 years – but this doesn’t mean that they have been accepted by everyone like a white shirt or a monochrome simple t-shirt!

Even during my teenage years, if I would have worn ripped jeans my parents would not have approved.

What seems like an accepted idea has a different notion for different communities. If you go to the smaller realities, where people are not familiar with the modern concepts of fashion, ripped jeans are still considered taboo.

In all these areas (and many more), the influence of a specific culture is less compared to the Asian Region of the world (and by Asia, I mean the geographic region between the Mediterranean Sea and the Pacific Ocean). All these small cultures may have seen globalization but it has not really touched the lifestyle of the people there.

Ripped jeans, as I mentioned before, have been seen as an element of “fight” over the last decade, which I think, can be one of the reasons why people complain about them. Another reason can be their look, their skin-showing feature.

What may be perceived as a fashion statement by youths conflicts with the interests of older generations.

In the end, I just want to say that while the term “fashion” has evolved a lot (for both men and women), there is still a long way that this iconic garment has to cover.

It’s going to be a long ride (and a bumpy one) before everyone (and by everyone, I mean at least 80% of the world’s population) can actually accept Ripped Jeans as a part of their respective dressing cultures.

Styling Polo Shirt- Dos and Don’ts To Keep In Mind

4 Ways To Style A Statement Blazer This Season

5 Clothing Hangers That Can Save Your Time