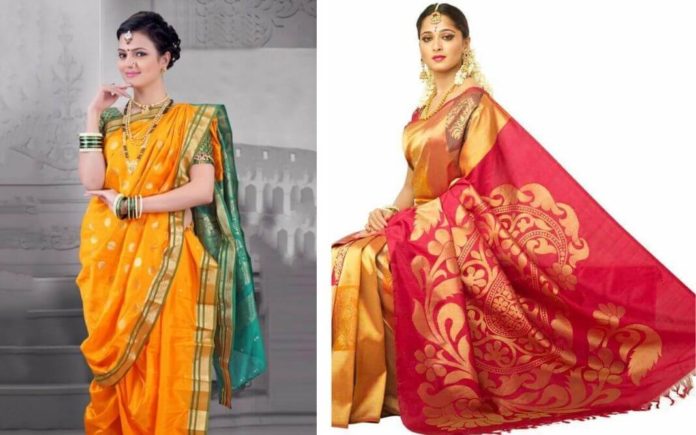 Owing to the diverse population of India, there is an extensive variety of culture, cuisine, art and fashion.

Traditional dresses of India not only vary by state but also according to the distinct religions and communities within the state.

The Indian traditional dress for girls is evergreen and timeless. Though the ethnic dress has evolved with time, the rich heritage of India is still reflected through the traditional dresses and different types of jewellery.

Let’s take you through some of the most famous Indian traditional dress for girls and different jewellery styles to match with.

Traditional Dress For Girls in India:

The Rajasthani traditional dress for girls is vibrant and elaborate. Rajasthani women dress in ghaghra, choli and odhni.

Ghaghra is a long skirt with pleats which comes in many colours, embroidery designs and fabrics, such as cotton, silk or georgette.

The choli also called kanchli or kurti covers the upper body. Both ghaghra and choli are embellished with mirror-work and sequins giving an ethnic touch to it.

The Rajasthani traditional dress for girl also includes a long veil called odhni or chunar, which features beautiful embroidery or mirror-work and is made of light fabric.

The Rajasthani attire is incomplete without the traditional Rajasthani jewellery. If you want the perfect royal and extravagant look then consider pairing your traditional attire with these charming pieces of jewellery:

A Rajasthani Maang tikka which is in a circular or bell shape, unlike the usual Maang tikka found in other Indian jewellery. Traditional Borla is made of pure gold embedded with pearls and Kundan.

A hoop-shaped gold nose ring attached to the ear with a gold chain. Usually worn on the left nose, it is a mark of married women in Rajasthan.

This is an armlet worn to ornate the upper arm. Traditionally, it is embellished with meenakari work in red and green with studded stones.

Also called Timaniya, it is a rectangular choker neckpiece immaculately studded with Kundan and other precious stones.

If you want a less elaborate look, you can adorn your traditional Rajasthani attire with tribal pieces of jewellery- ivory/silver bangles, silver necklace, jhumkas and borla.

The traditional dress of Bengal is usually the saree, made of cotton, silk or chiffon.

Out of all the sarees donned by Bengali women, the classic white saree with red borders is the most famous traditional dress for girl.

This saree is worn during many religious festivals especially during the Durga Puja celebration.

Not many people outside the state are aware of the significance of the colour combination of the saree.

The white symbolises purity and the red colour symbolises fertility, while the saree is the celebration of the feminine.

Some of the other popular sarees are- Koirial saree which is an off-white colour saree with a red border and worn with a red blouse.

The Garad saree whichcomes in the same colour combination has a thicker red border with printed patterns.

Tant saree is another traditional Bengali statement saree which is made of cotton and comes in a variety of colours.

The word Tikli translates to tiny in English. It is a small elaborately detailed piece of gold ornament that lies flat on the forehead. It is similar to a maang tikka and is worn by Bengali brides.

This is a traditional Bengali gold earring in a human ear and church bell shape, found in a variety of meenakari pattern and sculptures.

The most commonly worn choker neckpiece that fits tightly around the neck and is made of detailed gold designs. Popularly worn by Bengali women during Durga Puja.

A pair of broad gold bangles with ornate designs, is signature jewellery of the Bengali tradition.

An open-ended gold bangle with intricate designs on it. Nowadays, Bauti is also made with white gold and diamond in contemporary designs.

Maharashtra literally means ‘Great’, it is India’s largest state with rich culture,tradition and ritual. The state’s unique dressing and jewellery style distinguishes it from other Indian states.

Nauvri sarees are draped in a unique manner, giving it a similar look to the dhoti. Commonly found colours in a Maharashtrian saree are green, red and yellow.

Choli or blouse worn underneath the saree is short and half-sleeved with hooks in the front making it easier to wear.

To get the quintessential Marathi look you need to adorn your saree with some traditional Maharashtrian jewellery.

Some of the most popular Marathi jewellery to complement your saree with:

A traditional nose ring studded with pearls, mostly coloured in pink and white.

It is usually made with gold and has various motifs embedded in them. Commonly worn at weddings, religious ceremonies or family functions.

These are earrings worn on the helix of the ear. Made out of pearl or precious stones, they come in a lot of elegant and modern designs.

Also known as Bajuband, it is worn as an armlet on the upper arm, just below the shoulder.

Traditionally it was worn on both arms but as times changed, wearing it on one arm has become a style statement.

Vaakiis made of solid gold studded with precious and semi-precious stones in the centre.

This is a Maharashtrian bridal neckpiece which is made of tiny coins woven closely together.

Each of the coins is carved with motifs of Goddess Lakshmi or Goddess Sita, to signify wealth and fortune.

A choker necklace of pearl, the Moti Haar does a lovely job of accentuating the woman’sneck.

Also known as Tikada, the jewellery has precious stones embedded as a pendant.

Gujarat is an Indian state that embraces colour not only in its culture but also in its traditional attires. The traditional dress for girls is three-piece attire called Chaniya Choli.

Chaniya or lehenga is a coloured skirt or petticoat garment worn below. It is designed with glass or mirror-work.

On top of the chaniya, women wear Choli which is an embroidered short-sleeved blouse.

The attire is completed with along piece of cloth called odhni or chunni which is worn like a veil.

The women may also wear a kurti known as Zhabo instead of choli, along with their lehenga.

Women in interiors of Gujarat adorn themselves with tribal silver jewellery which has become more popular amongst others because of its chunky addition to the traditional attire. Some of the traditional jewellery to enhance your outfit:

A delicate pair of earrings with several chains that pass over the crown of the head and is attached to the earlobe.

Head jewellery with multiple gold chains linked together with enticing motifs embedded with emeralds and rubies.

An oxidized silver armlet worn on the upper arm by both men and women.

A royal jewellery piece of Gujarat, this necklace is made with intricate kundan designs.

A waistband made of silver, highlights the waistline of women and is worn at weddings and festivals.

Located in the southernmost part of India, Tamil Nadu is a state famous for its extravagant Temples, appetizing food and rich culture.

One significant aspect of Tamil Nadu’s rich culture is its traditional clothing and jewellery style, which symbolises the cultural essence of this south Indian state.

Tamil Nadu is famous for its Kanchipuram or Kanjivaram sarees with intricate zari work, whichare the traditional dress for girls of the state.

The colour, texture and exquisite style of Kancheepuram saree is quite unique compared to other styles of saree.

Pavada is a half saree dress adorned by Brahmin girls. This saree contains a full-length skirt along with a short blouse and a shawl known as Davani. This traditional dress for girls of Tamil Nadu symbolises young age and beauty.

Temple Jewellery is inspired by temple designs and sculpture patterns, usually made in gold. Some temple jewellery pieces you must pair with your saree:

A simple centre nose ring worn by the Brahmin brides of Tamil Nadu and Bharatnatyam dancers.

A stunning gold necklace with mango shaped pieces struck together with a pendant carved into a peacock. This long necklace reaches the naval and is believed to prevent pulmonary disorders.

A ‘V’ shaped armlet with an exclusive design in the middle and intricately carved peacocks or flowers on the side.

A waistbelt made of gold that incorporates sculptures of Goddess Lakshmi and various patterns of flowers and peacock.

This is a toe ring, commonly worn by married women. It is a ring made of silver with two or three lines and is worn on the second finger from the toe.

Hope the above traditional dress for girls has inspired you to get a perfect Indian ethnic look for your next occasion.

If you’re looking for more jewellery designs to go with your traditional or ethnic outfits, then head to https://www.zerokaata.com/ for a wide variety of jewellery pieces that will add elegance to your traditional look and leave everyone spellbound. 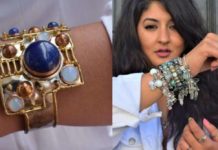 The Ultimate Guide: How To Choose & Stack Bracelets 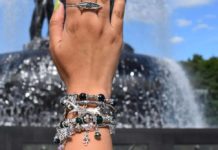 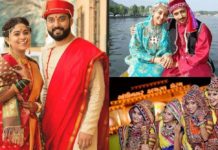 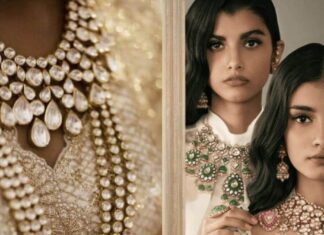 How To Choose The Right Blanket For The Bedroom?

Everything You Need To Know About Kundan Stone