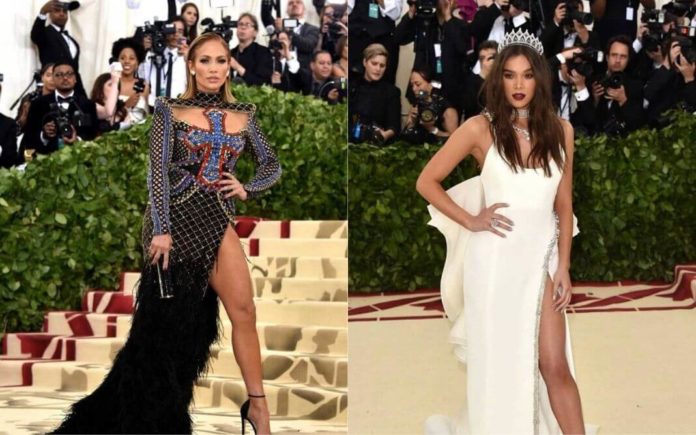 Met Gala is formally known by the name of “The Costume Institute Gala” and it is the biggest fashion fundraising event, organized to benefit the Metropolitan Museum of Art’s Costume Institute in New York City.

It marks the opening of the Costume Institute’s Fashion exhibit. Hosted on every first Monday of May, Met Gala 2018 took place on 7th May and celebrated its 70th anniversary.

Since 1995, Met Gala has been chaired by US Vogue editor-in-chief Anna Wintour.

She enlists the celebrities/artists to co-chair the event. The previous hosts include Taylor Swift, Katy Perry, and Marc Jobs.

This year, Met Gala was hosted by Rihanna, Amal Clooney, and Donatella Versace.

This year’s theme was Heavenly Bodies: Fashion and Catholic Imagination.

Pope Benedict XV’s white silk cape embroidered with gold thread and the pointed bishop’s hat of Pope Leo XIII were displayed alongside the pieces curated by Coco Chanel, who was educated by nuns, John Galliano, Cristóbal Balenciaga, and Donatella Versace, who was the sponsor of the exhibition.

The theme was put up as an interpretation of the impact that the Catholic church has had on fashion through the ages.

Heavenly Bodies: Fashion and Catholic Imagination is said to be the most controversial theme in the history of Met Gala due to the fact that fashion ensembles were placed alongside sacred artifacts.

Andrew Bolton defended his designs by giving a statement at a press conference in Rome: “Some might consider fashion to be an unfitting or unseemly medium by which to engage with ideas about the sacred or the divine, but the dress is central to any discussion about religion. It affirms religious allegiances and, by extension, it asserts religious differences.”

Keeping the theme in mind, the most famous faces from fashion, film, music and art gathered to raise money for the Costume Institute. The Red carpet started at 7 pm (local time).

The grand opening to the exhibit began with the cocktail hour, followed by the dinner.

There was a surprise performance by Madonna, who opened her stunning performance with a ripping – and fitting – rendition of “Like A Prayer”.

Priyanka Chopra wore a beautiful Crimson velvet gown with a long train by Ralph Lauren paired with medieval golden chainmail coif to go with the theme of Heavenly Bodies: Fashion and Catholic Imagination.

The co-host of the event wore custom Maison Margiela by John Galliano and the jewellery by Maria Tash, Cartier Konstantino and a statement headgear.

Madonna wore a beautiful black gown by Paul Gaultier and a stunning headpiece.

Black Lively stole hearts with her stunning looks. She wore Versace gown with the train so long that she had to take a party bus for the transportation.

Anna Wintour was seen in Chanel.

Katy Perry wore something really unusual by Versace but she did manage to adorn it beautifully.

Kendall Jenner wore an Off-White dress with the jewellery by Tiffany & Co.

The co-host of the event wore a stunning flower print gown with a long train by Richard Quinn.

Jennifer Lopez looked stunning in a gown by Balmain with Tiffany & Co jewellery.

Hailee Steinfeld looked breathtakingly beautiful in a white gown by Prabal Gurung. She layered her neckpieces in a very subtle and elegant manner, paired with a beautiful headpiece.

Jeremy Scott and Cardi B:

Jeremy Scott and Cardi B wore Moschino. Cardi B showed her baby bump in an off white stone studded dress paired with an extra-ordinary headgear.

Deepika Padukone slayed in the red gown by Prabal Gurung

Whose look did you like the most? Drop comments and let us know about your favourite celeb look.